Despite its foundational Christian heritage, America is rapidly degenerating into a Godless society. The church in America, although highly visible and active, appears powerless to redirect the rushing secular currents.Mired in a moral and spiritual crisis, America's only hope is a national revival, like God has graciously bestowed in the past.
From the beginning, Christian values ingrained America's political and social fabric. Its democratic form of government was founded on faith in God. To this day, United States currency bears the inscription,  "In God We Trust. "America flourished while Christianity permeated all aspects of life, including the laws, education, and culture.
The powers in America today, however, have chosen a path of rejecting God and His ways. Federal courts have interpreted our constitution as requiring that the Bible, prayer, and religious discussion be removed from classrooms,community buildings, and places of public gatherings. Government officials and educators across the country are systematically eliminating any vestiges of God from society. Militant secularists will not be satisfied until God is expunged from every facet of American life.
American laws are being reinterpreted and rewritten to sanction what is abominable to a holy God. In 1973 the Supreme Court legalized abortion for any reason, and Congress subsequently passed a law providing government funds for such barbarous acts. Old laws making homosexuals practices criminal are being repealed, and new legislation is being enacted requiring society to support such lifestyles.While religious discussion is gagged, pornography is permitted to saturate our culture.
Our society is fast becoming openly hostile to Christian values.The media trivializes and ridicules Christianity in the name of of humanistic and pluralistic concerns. American culture is dominated by teleivision and movies, whose profanity and lewdness tramp God's honor into the mud, inculcating non-Christian values from infancy. Public schools teach our children how to practice various forms of immorality.America is reaping the dire consequences of rejecting God. Our society is morally bankrupt, and the problems seem resistant to government cures....And America appears helpless before its great problems....
There is Hope. Revival is possible as long as God is God. Jonathan Edwards, a leader during the First Great Awakening in America, argued that God grants light when the darkness is the greatest, and it was in just such times that the glorious periods of revival occurred in America's history.When there was disinterest in religion, gross immorality and rampant unbelief, God poured out His undeserved gracious blessing.
We must believe God for something more than our generation has seen. May our sights be raised and our faith increased, to fervently seek God for a national revival. What God has done in the past, He can do it again!

For thus saith the high and lofty One that inhabiteth eternity, whose name is Holy; I dwell in the high and holy place, with him also that is of a contrite and humble spirit, to revive the spirit of the humble, and to revive the heart of the contrite ones. ( Isa 57:15 )

Posted by Followers of Christ at 10:18 PM No comments: 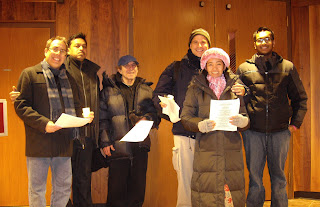 Last saturday ( December 22 ) , we went out Christmas carolling with the brethren from Woodside Bible Chapel in Maywood,IL.Six brethren joyfully sang for the Lord that night, although it was really cold.We enjoyed singing for the Lord and for the people who live near Woodside Bible Chapel.It was a blessing to see people who came to the door and listened to us while we we're singing for them.We could see that they we're blessed for us to sing for them,and Praise God  because it gave us the opportunity to share some Gospel tracts with them and invite them to our Christmas Service on Christmas Eve.There was one 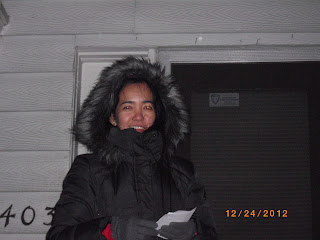 family who even gave us a big pack of  chocolates
and we praise God for their generosity.We did not expect that,because we sang for them not to get anything but to give them the Good News of the Lord by sharing the Gospel so it was a blessing from God.Then we decided to go to Walgreens,and we sang in front of the store.People came and went out from the store and we passed some tracts and invitations for Christmas eve to them.
We encourage everyone to join the brethren of Woodside next year to sing for the Lord and for the neighborhood.It was fun and a great opportunity 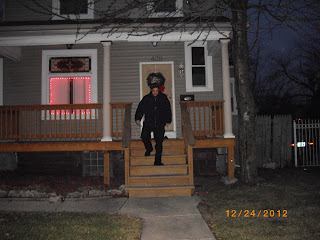 to serve the Lord and share the Gospel to people.It was a memorable experience to cherish and I believe one way to show the Christmas spirit to people around us,especially the people in our church neighborhood, that we care for them.This is one way that we can serve our Lord before His birthday.
After carolling,we praise God for the opportunity 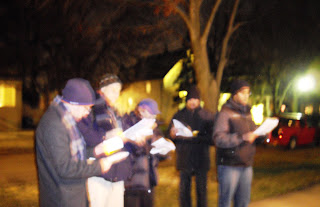 Posted by Followers of Christ at 9:57 PM No comments:

We want to share the experience we had christmas carolling in Franklin Park.The brethren went to Christmas carolling last December 15.It was cold and raining that day, but we prayed to God that the rain will stop so that we can go and carolling.Praise God! He heard our prayers,and the rain stopped that night.It was a blessing to experience Christmas carolling here.We sang from house to house,although not all the people opened their doors.It doesn't matter because were doing it for the Lord as well as to people.We just left some tracts in their doors to reach them with the Gospel.There was a family that allowed us to go inside their house to sing for them.We praise God for that,because the door of opportunity was opened to share the Gospel to them and invite them to Calvary Chapel O'Hare.

We want to encourage the brethren to join us next year.It was cold but anything you do for the Lord's kingdom will not be in vain.After all we are here to bring glory to His name .The Lord will give you the joy in your heart in serving Him.This is one thing that we can do for our Lord before His birthday.I believe it is a way to show the Christmas spirit to people around us and that we care for them. 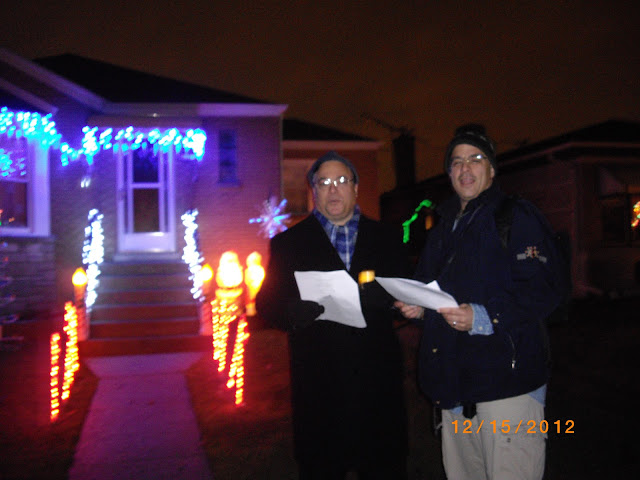 Posted by Followers of Christ at 9:55 PM No comments:

Our Experience in Our Walk with God 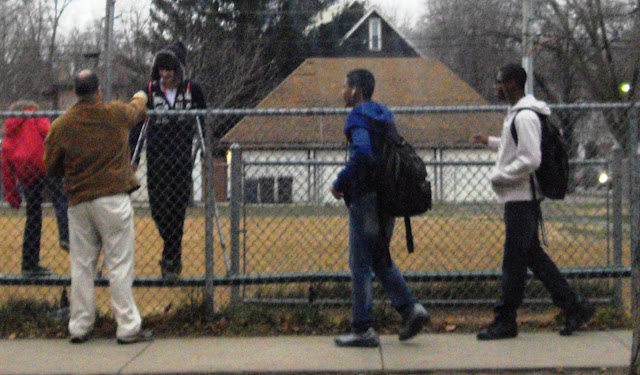 Praise God! He is worthy to be praised!

I want to share with you what the Lord did last Saturday when we went to Chinatown in , and in the days after.

My husband and I were coming back from his work, and we went to to buy some food. God used that time for my husband to distribute tracts translated into Chinese to give to the Chinese people there. Some were receptive, and some were not, but praise God for that open door to share the gospel with people. My husband met the owner of one of the food shops there who is a Christian. It was a blessing to know Him as a Christian who loves the Lord and he shared with us the words of God that were written in Chinese on the wall of his store. We praised God for that because Chinese customers will go to their shop, will read that Word, and it might be a way for them to come to know the Lord.

On our way back from Chinatown that day, my husband brought me to a neighborhood he used to live in in . But God put it on my husband’s heart to visit some Christian friends he knew from there to encourage them. So God led us to visit them, and when we went there, we felt that they really needed hope and encouragement. We praised God because He used that time for His Word to be preached, to reach out to His people who need to be strengthened by His Word.

My husband read the Word of God in 1 Peter and God’s Word was very powerful. It encouraged them when they heard it. We sang worship songs and Christmas songs for the Lord. All us were blessed. The mom and daughter who are my husband’s friends said that we were used by God to bring the light into their house.

Sometimes there are people who are hopeless, depressed, and afflicted by life’s circumstances. We, as Christians, must have the heart for people like them and obey the voice of God who is urging us to be used by Him in encouraging and praying for them.

Last night we went to a nearby gym. When we got to where we were going to work out, there were some teenaged boys who were there and talking. The Lord led my husband to pass out to some of them tracts that are made to look like million dollar bills.

The boys were surprised and one said, “Oh, he gave us money. Why is he giving us money?”

Another boy sitting on the stairs said, “No, he gave us more than that. He gave us God.”

When my husband heard that, he went to the boy sitting on the stairs and asked him, “What did you say?” The boy was a little bit scared because my husband’s voice is loud and firm. The boy thought he’d said something wrong.

But then the boy said,” I said you gave us more than money. You gave us God.”

Then my husband said, ‘Oh yes, you’re right, man!” The door was open for the gospel to be preached. Praise God He made a way!

My husband began to preach the Word of the Lord to the boys and they were listening to him. While he was doing that, I was silently praying that the Lord would touch the hearts of those young boys so that they will come to know the Lord as their savior.

We as Christians are called by God to preach the Word of God to the lost. We never know when or where the Lord will use us as His instrument. I want to encourage everyone to share the gospel, to give some tracts to people whom you meet.

“Go and make disciples of all nations, baptizing them in the
name of the Father, and of the Son, and of the Holy Spirit,
and teaching them to obey everything I have commanded you.”

You never know what the tracts you will give can do for the life of the person who receives it. God bless you, brethren!

Below are some photos of my husband and I sharing gospel tracts with students: 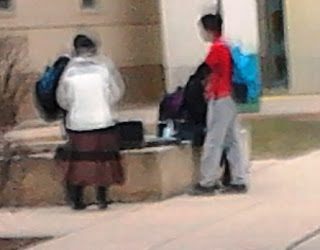 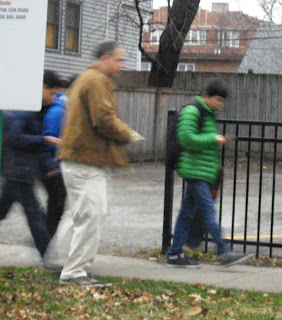 Posted by Followers of Christ at 11:57 PM No comments:

Posted by Followers of Christ at 11:07 PM No comments:

Posted by Followers of Christ at 10:59 PM No comments:

Posted by Followers of Christ at 10:53 PM No comments: How to Use the Law to Effectively Share the Gospel